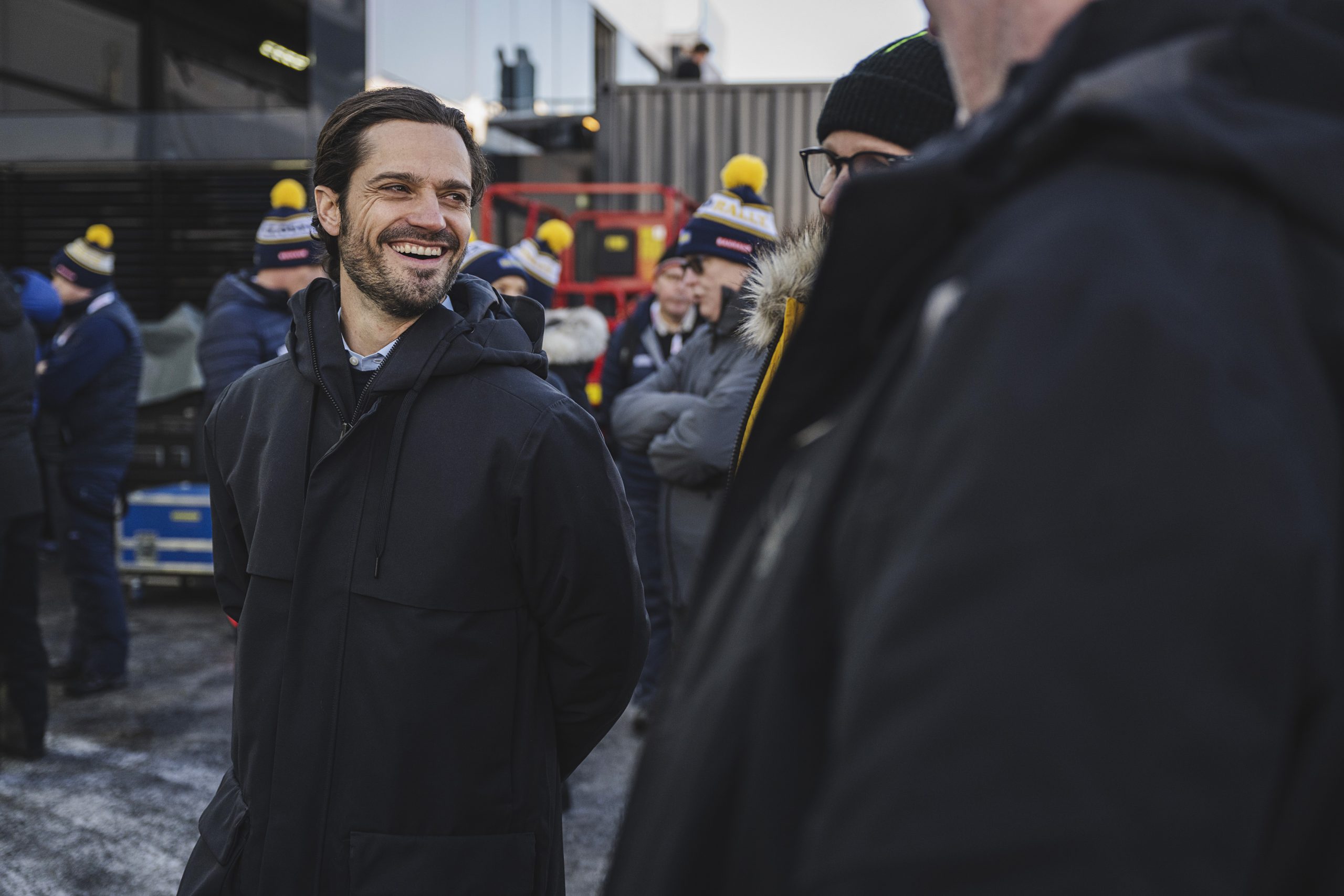 It buzzes with life when Prince Carl Philip, FIA Vice President Robert Reid, Umeå’s municipal councilor Hans Lindberg, and Governor Helene Hellmark Knutsson walk around Umeå Service Park in the Nolia area. They get to meet top drivers like Kalle Rovanperä and Oliver Solberg and get exclusive insight into the team’s work.

The world’s best rally team has come to Umeå to participate in the World Rally Championship. Mechanics and engineers are working feverishly to find maximum settings for the high-tech hybrid cars introduced in WRC 2022.

But the energy source is local and comes via Umeå Energi from Stornorrfors hydropower plant in Umeälven (15 kilometers from Umeå), wind turbines, and solar.

“Rally Sweden at the forefront in many was”

When Rally Sweden is arranged in Umeå for the first time, fixed electricity replaced the diesel plants at both Umeå Service Park and The Red Barn Arena, which are operated for the most part by fixed electricity from renewable sources.

– Rally Sweden does an impressive work with these issues, how to dig electricity into the hill and be at the forefront in many ways. It is also good that the rally and Umeå can do it together. Hans (Lindberg) said yesterday that the teams wanted to bring their charging stations here, so it is cool that Rally Sweden can say that “you can leave them at home.” The team also appreciates the proximity to everything and the compact format here in Umeå, says Prince Carl Philip.

– As the Prince described in a good way, we work purposefully with sustainability here in Umeå. Right here, we have renewable electricity that we get from hydropower 15 kilometers from here, wind turbines, and solar. We charge it directly into the batteries in a sustainable way, says Hans Lindberg.

Rally Sweden’s CEO Glenn Olsson is aware that there is a long way to go, but the organization works hard and humbly to take steps towards the vision year after year.

– The transition to fixed electricity is one of several significant changes that steer us in the right direction with the move to Umeå. We are constantly open to innovations and solutions in all parts of our event and we want to challenge our partners to think new and big. We would like them to come up with solutions that we have not thought of, says Glenn Olsson and continues:

– Our dialogue and our cooperation with Umeå municipality is also important. Umeå municipality has ambitious climate goals, and we are convinced that they can help us move forward in our environmental and climate ambitions.

When the World Rally Championship is now run for the first time with Umeå as its capital, most key suppliers are environmentally certified (ISO 14001 / Swan) and their active contribution to sustainability is an essential part of the event.

The company Esam are environmental coordinators for Rally Sweden and will help the rally take further steps in its environmental and climate work.

– It feels very exciting. The move to Umeå is positive in many ways from a climate perspective. In addition, the WRC’s decision to introduce hybrid engines in combination with fossil-free fuel is a significant step in the right direction, says Michael Jalmby, senior consultant and collaboration manager at Esam.

Want to be an international forerunner

All major events have an environmental and climate impact. The car industry has traditionally not been at the forefront of climate work, but the industry has woken up. For example, Volvo aims to be climate neutral by 2040. The FIA ​​(International Automobile Federation)’s goal is to reduce carbon dioxide emissions in line with the purposes described in the Paris Agreement and to have zero emissions by 2030.

This is also in line with the organization Umeå Municipality’s climate goals.

Rally Sweden works purposefully to be a role model for both the World Rally Championship and the international motorsport industry to transform into a more sustainable event.

– When you set goals and work with climate and environmental issues, you have to compare both with other rallies and where you are today. If Rally Sweden can continue to be an international forerunner, there is a potential for great leverage where we, together with the FIA, can have a large impact globally, says Michael Jalmby.

“Rally Sweden is one of the leading events”

And it is clear that in comparison with other World Cup rallies, they have come a long way in their work.

– The FIA ​​has high goals, and it is fantastic to see how our partners and events take steps. It is interesting to see how renewable and locally produced electricity is used for the event here in Umeå. Rally Sweden does a very, very good job in these matters and is one of the leading events in the WRC, says Robert Reid, FIA’s vice president.

– It is also exciting that sustainability is so high on the agenda for Umeå municipality. We do our part with the hybrid cars from the FIA, among other things, but we also want to help places like Umeå to arrange a sustainable event.

Rally Sweden received three stars in the FIA’s environmental certification in 2019 and 2020, which means that it has met the highest level of the FIA’s industry standard.

A new audit of Rally Sweden is currently underway, where the FIA ​​is reviewing environmental and climate work in 17 different areas with everything from energy to chemicals and water issues. The hope is that Rally Sweden will receive a new three-star environmental certification.

When the World Rally Championship is over, the work towards the vision, Rally Towards Zero, will continue with an analysis of the 2022 event and an important dialogue on how to take the next step together with suppliers and partners.

– It is an important key for us. Ambitious climate work is a win-win for both our partners and us, and if we are to take further steps, we must do it in collaboration with all our suppliers, partners, and not least all visitors to the rally, says Glenn Olsson.